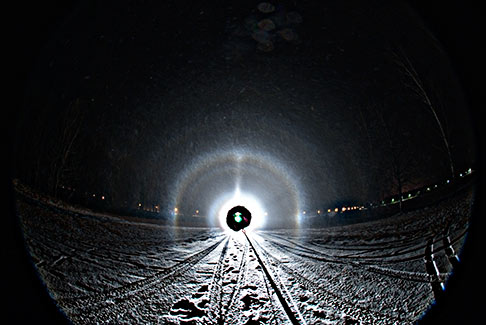 Spotlight beam revealed a bunch of pyramidal crystal halos on 14th December 2009 at Janakkala, Finland. I drove to Kalpalinna ski resort, where snow guns were turned on. Immediately after walking into the spotlight beam I noticed a halo well inside the 22° ring. Initially I thought that surely this is a slice of the Minnaert cigar ( 1 ), but the ring just stayed there and the crystal swarm seemed homogeneous, so I concluded that this is the 9° halo.

At the camera's LCD display the 18°/20° (?) and 35° halos could easily be seen. After first seeing them in the photo I thought I was able to see them visually too, but that was not certain. I did mess up the crystal sample, since the most-likely-pyramidal-crystals are distorted and round - the gear was still too warm during the sampling. On the other hand, if I would have waited longer, there would not be any signs of pyramids in crystal samples, since the pyramidal phase was gone in less than 10 minutes and did not reoccur during the rest of the night.

By clicking the image above the gallery opens.
Posted by The Halo Vault at 18:24