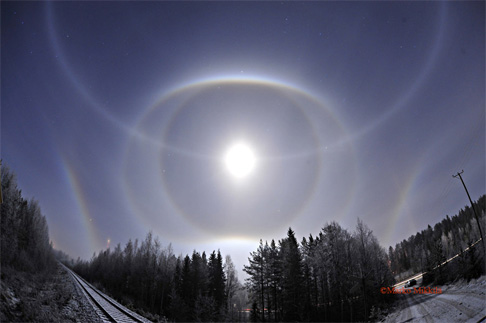 In the morning of 3rd Decemeber Marko Mikkilä packed his halo gear and drove 200 kilometers to Sotkamo, where snow guns were running at the local ski resort. Once he arrived, there was fog, but it was mainly water fog and only occasional poor halos were seen.

However, when darkness fell, the water fog cleared off and diamond dust started kicking in as the air got colder. In the beginning the moon showed no good halos but spotlight gave a reasonable display ( 1 ). Later also the moon halos catched on, as is seen above. Click on the image for more photos.

Simulation of the display ( 2 ) needed slightly flattened columns to get the subhelic arc intensity right. With any other crystal shapes, the part opposite to the moon where this halo is tangent to Tricker arc, was not visible. Intuitively those flattened crystals would take Parry orientation, so it looks like again we are not really understading it. Same effect was also present in the great Himos display last winter ( 3 ).

After midnight Mikkilä headed home because the high clouds in the background were becoming too disturbing. All together the halo hunting trip took 600-700 km of driving. Looking at the results it was definitely worth it. See also the photos by Jari Luomanen from the same night at the Sappee ski resort, and be sure to read his insightful description of the diamond dust formation on the right ( 4 ).
Posted by The Halo Vault at 14:33