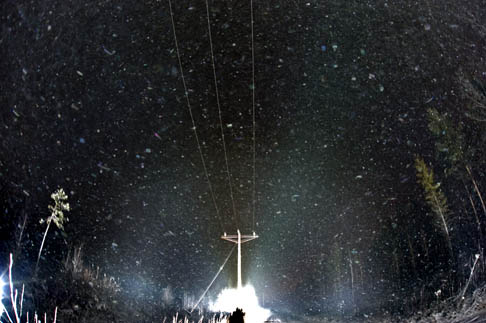 One would think that such a demanding halo as Liljequist parhelia would need the best possible swarm to be seen. While that may be true in halo displays from natural light sources, with spotlight it is a different story. Here Liljequist parhelia - the two diffuse light areas both sides of the observers shadow - are visible despite the apparently crappy crystals that are filling the air.

Also visible are vague upwards curving extesions from Liljequist parhelia, which might have formed a complete half circle around subanthelic point if there was no cutting shadow. These are signs of the diffuse subanthelic halo that was photographed last winter in Rovaniemi ( 1 ). See also the lamp side of the display ( 2 ). The photo was taken by Marko Mikkilä in Sotkamo on 14th December. Click on the image to see a simulation.
Posted by The Halo Vault at 16:59