Arctowski's book of optical phenomena in the Antarctic 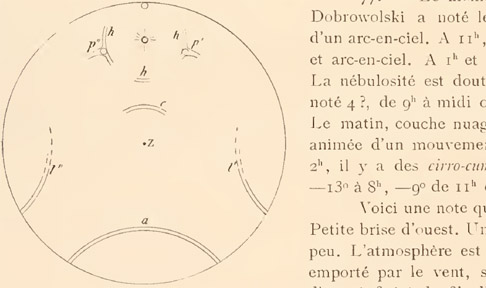 In 10 March 1897, a scientific research expedition ship Belgica got stuck in ice in the Antarctic waters. On board the ship was a Polish scientist Henryk Arctowski, who made notes of optical phenomena during the ship's one year and 3500 kilometer drift with the ice. His book of these observations, "Phenomenes Optiques de l'atmosphere", is now online ( 1 ).

Shown above is his most well known halo observation, the one with the "Arctowski arcs" that in the drawing rise from the horizon at about 120° from the sun. There are also other peculiarities, for Arctowski reports the patches of h to be 26 - not 22 - degree radius from the sun and the circumzenith arc distance from the zenith to be 28-29 degrees, which is probably more than it should be at the observation's sun elevation.

But if we leave the measurements aside and look at the drawing, the sunside of the sky looks pretty ordinary. The Arctowski arcs, which he writes as being faint, could be misplaced 46° infralateral arcs. And the rainbow in the opposite sky could be a fogbow. So, nothing extraordinary there, except maybe for the fogbow, that still has not been captured on film with halos in naturally lighted conditions.

Any French speaking readers here who could translate Arctowski's account of the display (PDF page 40-41)? It looks like he had made some interesting notes on the halos showing up in nearby crystals. I can add it here.
Posted by The Halo Vault at 19:54

Email ThisBlogThis!Share to TwitterShare to FacebookShare to Pinterest
Labels: Historical