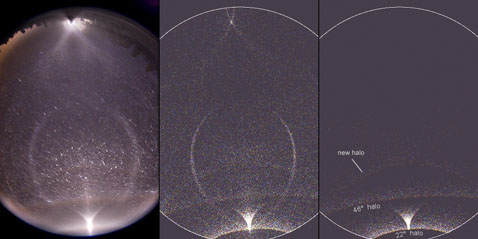 It's been before our noses for a year already ( 1 ): the weak colored arc reaching far outside the 46° halo in the display observed on the night of 5/6 November 2008 in Rovaniemi. I have thought of it as some sort of 46° supralateral arc extension below the horizon. But something has not felt quite right with that and I finally decided to run a simulation.

The simulation above was made with column and random oriented crystals. Crystals towards triangular shape seemed to provide best overall fit with the photo. Light source elevation for the simulation was -11.5 degrees. The simulation on the right is filtered, showing some common halos together with the new halo arc.

Simulations and crystal raypath figures are from Jukka Ruoskanen's software.
Posted by The Halo Vault at 18:18