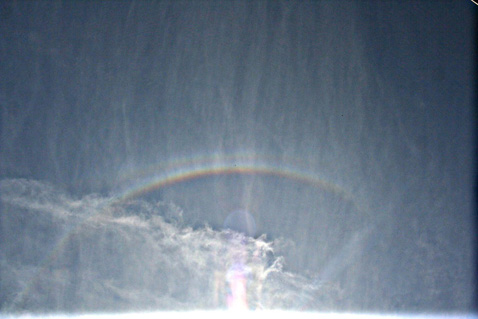 On 26 July 2009, at a sun elevation of 60.1°, I observed a second arc above the 22° halo and complete circumscribed halo ( 1 ). Besides it, there was also a CHA, and later a parhelic circle appeared. Further haloes were not present. At this sun elevation the Parry arc and the 23° plate arc are in similarly position, a precise distinction is very difficult, particularly that other observers reported further Parry arcs and other pyramidal haloes (9° and 18° halo), too. As the complete form of the arc can more or less be seen in the usm-ed image, I tend to Parry arc. This would actually be the Parry arc at highest sun elevation in the German 24-year statistic. ( 2 - 3 - 4 )

Text: Claudia Hinz
Posted by The Halo Vault at 13:13