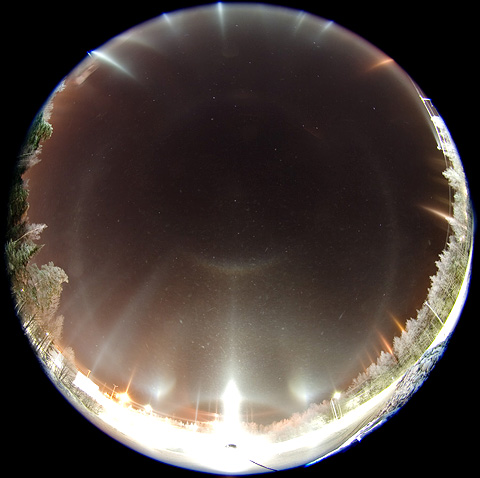 During the night of 2-3 January 2008 subhorizontal plate halos were observed in Tampere, Finland. The Sub-Kern arc and circumnadiral arc (both first discovered by Marko Riikonen in Rovaniemi in December 2008) are the most noteworthy forms in the display. Among some of the more common halos, also the subparhelic circle ( 1 ) was observed.

Superparhelia are also seen in the main image. Furthermore, there appears to be a faint, illuminated spot right in the zenith (first observed by Marko Mikkilä) in many images. This phenomenon is unaccounted for.

The subparhelia ( 2 ) appear to exhibit some type of lowitz forms, but this could also be due to divergent light effects. The subhorizontal helic arc is also a bit of a mystery as other parry forms seem to be missing. The lamp was at a negative elevation of ca. 11 degrees.