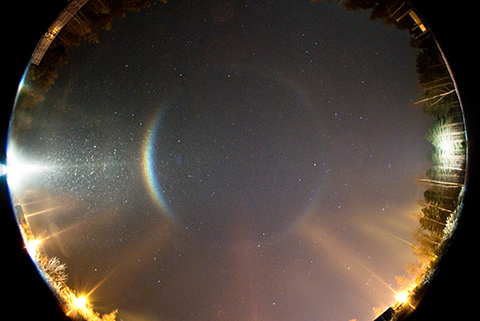 Sub-Kern, although already documented by Riikonen ( 1 ), was in the back of my mind when the plate crystal swarm got better in the night between 1st and 2nd January 2008. I was forced to photograph in a light-polluted parking lot, but immediately when lying on my back I could see something encircling the zenith. Pretty soon it came to me: sub-Kern and circumnadirarc. Despite the poor contrast conditions the halo shows up well in the photos, as expected since it could be seen visually as well.

Next evening (2.-3.1.2008) the plate crystal swarm was very impressive again, and this time it lasted for several tens of minutes, but unfortunately the diamond dust cloud did not spread very far. I did not even consider phtographing with the spotlight due to the surrounding streetlights. I did take one photo of the subKern on a dark field in the edge of the crystal area where the crystal density had decreased significantly ( 2 ).