Halo display in Himos on the night of 9/10 January 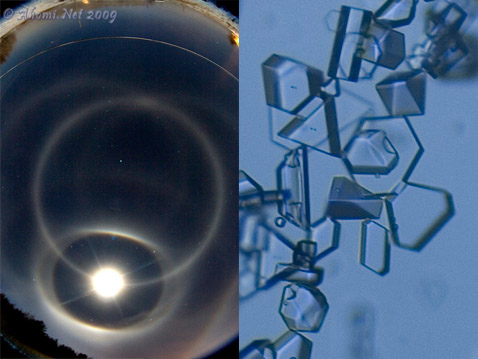 The display developed soon after the snow guns were started at 21:30 and began vanishing no earlier than 05 in the morning when Ac clouds rolled over. It was an unusually stable display, the swarm stayed in the same location and there were no much changes in the halo composition.

Jari Luomanen ( 1 ) and Mika Aho ( 2 ) photographed the display and took videos in the spotlight beam. I sampled crystals ( 3 - 4 - 5 ). Wegener arcs were full and both lower Parrys were visible.

Diamond dust halos were observed also in Sievi by Marko Mikkilä ( 6 ) and in Hyvinkää by Jukka Ruoskanen ( 7 ).
Posted by The Halo Vault at 13:40