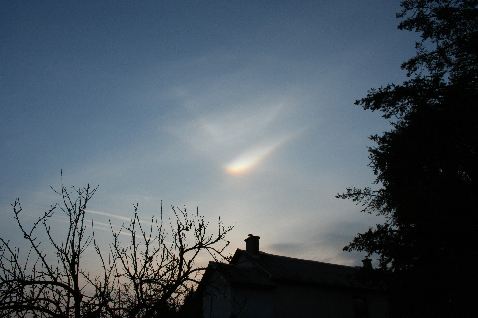 The weather in Vecsés, Hungary was mostly grey on 12 November, therefore the display came rather unexpected. Low in the horizon, covering the place of the parhelia and most of the 22° halo there was a thick cloud which remained there during the entire display. First the bright upper tangent arc appeared, but as the high clouds were moving, soon the upper sunvex Parry arc formed the second "V" in the sky ( 1 – 2 ). It was of the same intensity as the UTA, and I did not have to wait long until I could catch sight of the suncave Parry arc, as well ( 3 ). Unfortunately, Tape-arcs cannot be confirmed from the images.

When the Sun was of 4.1°-4.5° elevation, besides the supralateral arc, another halo patch formed under the CZA ( 4 – 5 ). I automatically took it as part of a 46° halo, but later it turned out that it might as well be 46° contact arc. As contact arcs are formed by Lowitz-oriented crystals, I had a closer look at the top of the 22° halo (what was outside the thick cloud), and unsharp masking of photos revealed lines that may be Lowitz arcs – if not jpg artefacts. It must be noted that all these images were taken about 5-7 minutes before the halo patch appeared. ( 6 - 7 ).
Posted by The Halo Vault at 22:52