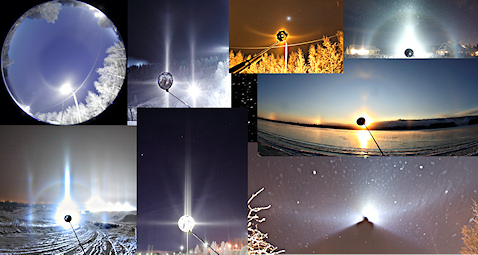 Having kept a keen eye on the weather for quite a while Marko Mikkilä and I finally managed to spent a few days (or, rather, nights) in Rovaniemi shooting halos. We observed several interesting displays the best of which featured subhorizon Lowitz arcs. Similarly, subhorizon parhelic circle was captured by placing the light source to a negative elevation.

We observed superparhelia and several other divergent light halo forms such as CHA and 120 degree parhelia. Both of us got to see several personal firsts so we consider the mini expedition a success.

Amidst all the frenzy, we shot videos (1) inside the crystal swarm. Mikkilä's custom modified HID lamp proved extremely bright and useful in these conditions. We were able to illuminate objects several kilometers away with it.

We also sampled crystals during a Moilanen arc display (2).