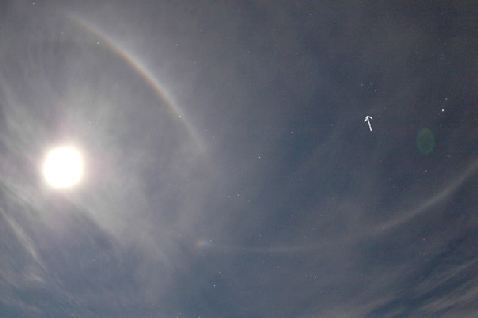 After over a month of no halos I got bombarded by a serious halo series that started after I clocked out of work to go home, and before getting into the car I started firing away with my Nikon D-100. Through the duration the halos observed were 22° halo, upper and lower tangent arcs, fine upper suncave parry arc, bright parhelia with lowitz arcs, very long parhelic circle, 120° parhelia, a fine CZA, supralateral arc, and infralateral arcs ( 1 - 2 - 3 - 4 ). At sunset upper sunvex parry arc was observed and ended with a bright red tangent arc after the sun had set.


The show was not over yet because the Moon came up and there was 22° halo, upper tangent arc with parry arc, supralateral arc and CZA ( 5 ). Later on I looked away from the Moon to see bright and complete parhelic circle and very bright 120 degree parhelia ( 6 ). I also got to see blue spot very clearly ( 7 ). When the Moon got high enough for the circumscribed halo and Parry to merge I continued to shoot photos. Now here's the real shocker: the next day I looked at the batch of these lunar halo photos and I found a Wegener arc ( 8 )! I could not believe it. I also looked for heliac because the Parry arc got quite bright ( 9 ) but it was not to be found.
Posted by The Halo Vault at 07:25