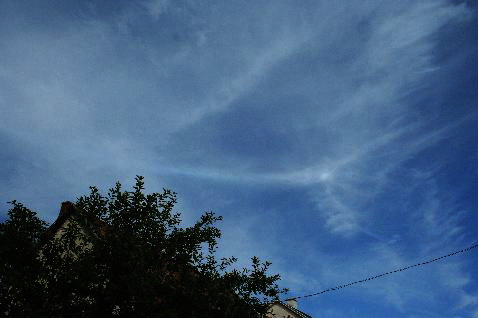 The image above shows the blue spot on the parhelic circle, photographed on 1 September in Vecsés, Hungary. Click the picture to see the colours in the original version. Its hue seemed almost electric blue compared to the white parhelic circle, and was really conspicuous even to the naked eyes ( 1 – 2 ).

My images were taken between 16:06 and 16:10 local time. The solar altitude in this period was between 32-31°, meaning that the blue spot was in its longest phase and exactly opposite the Sun. The simulation made with HaloSim reveals the position of the blue spot as compared to the 120° parhelia. The crystal population I used was hexagonal plates with 2° tilting angles ( 3 ). The composite image shows the original photo with unsharp masked image and simulation ( 4 ).

The 1 September display lasted a couple of hours. Besides the full parhelic circle, and other, more common halo forms, there was a long-lasting stage with Parry oriented crystals, and another stage with a 46° halo – this latter one was observed by Alexandra Farkas. For further images of the diplay, see Alexandra Farkas’s and my website ( 5 – 6 )
Posted by The Halo Vault at 10:14