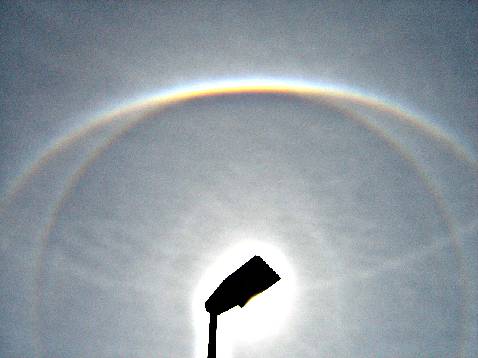 During the past few days there have been two displays with full parhelic circle over Finland. The first one occured in Kitee, East Finland shortly after 10:30 on 9 July. 11-year-old Jesper Rissanen took a video of this display ( 1 ). It included a full plate parhelic circle with 120° parhelia, and a circumscribed halo.

On 14 July in Lahti, Jani Varpujärvi took photos of the second display. This one also appeared at around 10:30, and involved pyramidal crystals, which formed the 9°and 20° column arcs shown in the usm-ed image above. Further pictures of the display are available in the photographer's gallery site ( 2 ).
Posted by The Halo Vault at 18:00