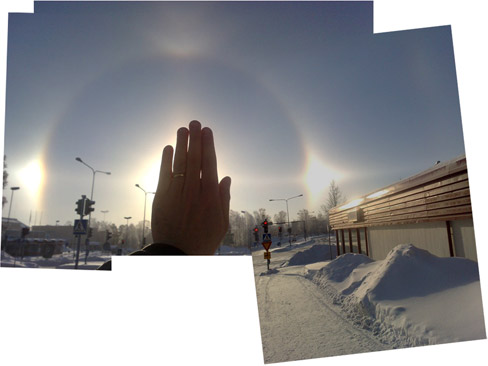 Miika Karppinen photographed this display in the town of Kajaani on 8 March this year. Upper sunvex Parry arc and 46° Parry arc are weakly present ( 1 ).

The other display occurred on 26 October 2006 in Salla ( 2 ). Photos were taken by Jani Päiväniemi. Under the circumzenith arc there is a patch of 46° halo, which could be indication of 46° contact arc. First convincing photos 46° contact arcs were taken three days later in Muonio ( 3 ).

Both Kajaani and Salla displays were captured with cell phone cameras.
Posted by The Halo Vault at 15:44