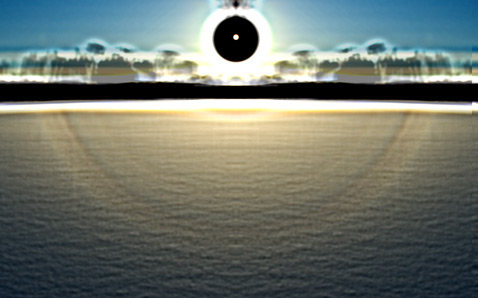 A broad 22° halo is observed in most odd radius displays. One factor explaining the broadness can be simultaneous occurrence of 22, 23 and 24° halos, or any combination of two of these halos. As we know, separation between 22° and 24° halos is detectable, but 23° halo has not been distinguished from the other two so far.

In the image above all the three halos are separated. This was made possible - in addition to having a suitable display - by stacking an extensive amount of images of a snow surface display. Using Rexistax, total of 379 frames were stacked and the resulting image was further stacked with its mirror image, essientially doubling the frames used. The separation of the three halos is seen also in non-mirrored image ( 1 ).

9, 18, 20, 35 and 46° halos were present as well. The first three are visible in the above image, which is a close up of 8 mm fisheye image. The 9° halo, of which only the lowermost part is seen, is overexposed. An image with only minor digital enhancement is given for comparison ( 2 ).

Three versions of full frame image show the 35 and 46° halos ( 3 ). A single frame ( 4 ) reveals the true nature of the display: it was nothing a passer-by would notice, and to me it might not have been any special unless I had known that day earlier in the same place odd radius halos were observed ( 5 ).

The photography was done on river ice in Rovaniemi in February. The method was to take 3 to 5 photos from different heights by adjusting vertically the tripod central bar and then moving the tripod some 20-30 cm and again taking a set of photos, and so on. This was faster way to obtain large number of photos from different positions than moving the tripod after each shot, as was done day earlier.

The issue of pyramid crystal formation temperature was addressed in the discussion of the previous day display. Again the temperatures were not that cold, previous night was around -10 °C and it was cloudy. It cleared up in the morning and minimum temperature in the official measuring point of Rovaniemi center was -12 °C during the photography soon after midday.

Whether that is really the case, it is nevertheless good to keep in mind that odd radius halos may exist on snow surface in “unconventional” temperatures and they may be much more common than we have known. However, these displays may not be easily recognized as special and stacking might be needed to visualize them.
Posted by The Halo Vault at 15:14