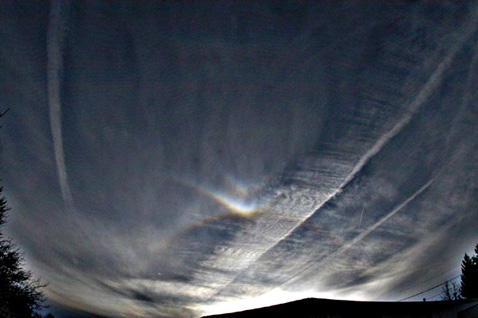 While at work prior to leaving I was outside and happened to look up and saw nice wide tangent arc spreading out. Inside it was a convex Parry, the first decent one since 2000. As I watched and shot photos I could see the more common concave arc and there was also faint supralateral arc and circumzenith arc.

I also visually could see Lowitz arc curving down from upper concave Parry arc and circular lowitz arc near the sunvex arc touching the 22° halo. What a way to start the new year for halos. It was nice to see both Parrys at once. Photos were unsharp masked to enhance the halos.

Text: Michael Ellestad
Posted by The Halo Vault at 12:37