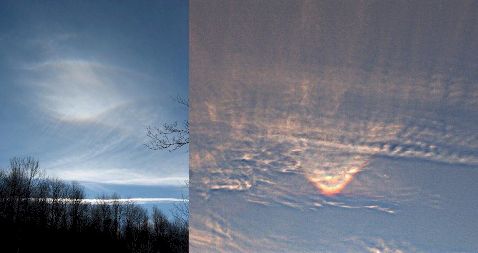 December 22nd was a day of complex displays over Central-Europe. While Hungary was covered with thick fog, mountain peaks above 900m witnessed sunshine and favourable conditions for halo-formation. Attila Kovács took the photo of the suncave Parry arc on Bálvány in the Bükk Mountains 956m above sea level. The display started with bright parhelia that appeared at 12:05 UT and lasted about half an hour. At around 12:30-12:40 the complex display began to emerge. First the 22° halo with the upper tangent arc. Altogether, a 22° halo, parhelia, UTA, a long section of the parhelic circle, CZA, supralateral arc and the sharp suncave Parry arc were visible. The Parry arc lasted about 5-10 minutes. There is unfortunatelly no report about the anthelic side.

Although the Czech Republic is two countries away towards the northwest, the distance is not that great for crystals forming a display in high clouds, especially that the Hungarian Parry observation was made in the north of the country. On the very same day Martin Popek photographed an attractive sunvex Parry in Nýdek.
Posted by The Halo Vault at 16:39