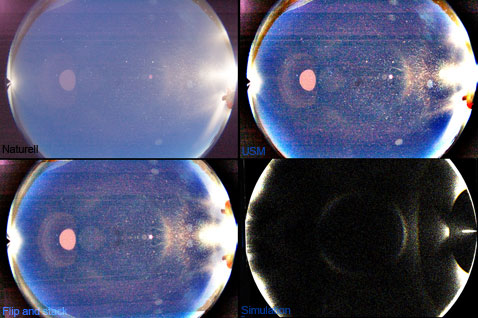 Sometimes it happens that when first photos of some halo are taken, more start piling up in the wake. This was the case for example with elliptical halos.

Now the Kilpisjärvi halo expedition seems to have resulted in second Kern photo, this time the light source being Cyclops X-15 spotlight instead of sun. In the images above - which are just versions of one photo - there seem to be two short arcs that match the location of the Kern arc as shown by the simulation.

The simulation (Jukka Ruoskanen's simulation software) is made for light source elevation of 0° which must be very close to the real situation. Thick h/d 0.6-1.0 regular hexagonal plates with tilts of 2° were used for the Kern arc. Thinner plates made also good Kern, but they produced additional circumzenith arc which is not seen in the photos.

In the first days and nights of diamond dust making in Kilpisjärvi we practically encountered every possible mishap. This was one of those nights. For one thing the blocker was not properly in place which resulted in lens reflections. Even worse, the lamp suddenly dimmed when the photo was taken: the battery that was supposed to be full had failed us.

So I had to increase exposure heavily afterwards in photo editing software to light up the dark photo. This resulted in excess noise and horizontal lines. To reduce the noise, mirror images of the photo were stacked ("flip and stack"). More natural versions are also given.

Upon experimenting with various crystal tilts and aspect ratios in the simulation program it became clear that Kern arc was always prominently accompanying the circumzenith arc around 0° light source elevations. From that point of view there is nothing special in Kern showing up in the photo: it must be there.
Posted by The Halo Vault at 23:03