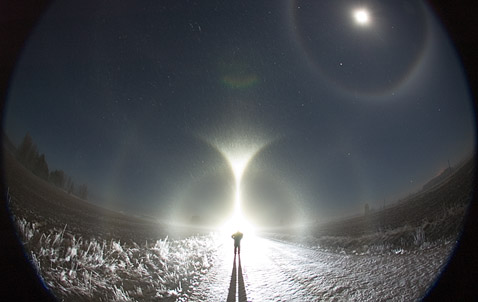 On the evening of 22th December weather conditions finally changed to better. Humidity was up with temperature around -8°C. At the Louekallio ski-resort snow guns produced a crystal cloud and action lasted few hours until crystals suddenly vanished.

Singly oriented columns dominated the swarm. With HID-modded Cyclops Thor Platinum X-15 lamp the display looks quite the same what we have seen already in haloreports, except that there is weird spots on both sides of the upper tanget arc (photo above, see also enhanced image). They seem to extend through the 22° halo towards the lamp, but this may be due to divergent light. In simulations arcs that bear some resemblance to these spots can be produced with slightly tilted Parry crystals, but we certainly need more photos to say what is going on.

Also Moilanen arc appears in the photo. At first glance it may seem to be
connected with the new effect, but closer look reveals they are two separate halos. Diffuse arcs were observed opposite to the lamp.

In the moon light, circumscribed halo, infralateral arcs, 46° halo and full parhelic circle were seen. The long Wegener arc, which continues close to infralateral arcs, was not seen visually. See also another photo of this stage. Later on ice crystals turned to be more randomly oriented. Moon elevation was 52°.

Similar column dominated display was also noticed by Arto Oksanen in Muurame. See his photos here. When 0ksanen first noticed the display, there was Wegener arc above the parhelic circle and he hurried for the camera. Unfortunately, the best moment was gone when he was back. "By the time I got camera from inside, halos had weakened and of parhelic circle only a trace was visible", Oksanen tells.
Posted by The Halo Vault at 23:55