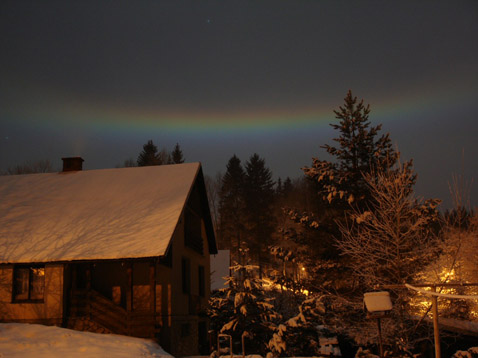 When I first saw photos by Vaclav Fego captured on December 22, 2007 in Vitkovice in Krkonose mountains I told myself just one thing – wow, that is amazing, I haven’t seen anything similar for a long time! On the images of this Moon halo display is visible bright and colorful circumhorizon arc together with short projections of infralateral arc low above the southern horizon. Also 22° halo with Parry arc and full paraselenic circle are seen. Here is one photo pointed at higher up in the sky and here is a composite image.

The situation captured on the photos is similar to this simulation, made with Halosim by Les Cowley and Michael Schroeder

In the same day there was also nice complex display around the Sun: