A diversity of surface halos in Juva 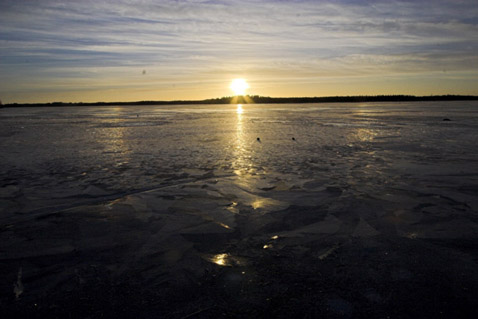 It is not unusual to see a 22° halo glittering in separate crystals on snow surface. The display that Jari Piikki observed on 22 December on a frozen lake surface is of a better quality. Towards the sun there were the parhelia and perhaps segments of a 22° halo, as shown in the photo above. Two close-ups are also provided: image 1 and image 2. In image 1 the close-up area of image 2 is marked with two white lines.

Piikki took photos of the responsible ice crystals. They seem to be frost crystals, which top ends has plates grown horizontally. See here and here. Crystals are large; the photos were taken with a standard lens. Some crystals show possible cavities.

The halo display on the ice surface was changing as one moved on the ice. This image shows faint extensions from the parhelia towards the observer. The display does not seem symmetrical, but slightly distorted towards right. This could be caused by uniform atsimuthal orientation of the crystals prisms. At least the crystal photos give an impression of all crystals having similar orientation. This is clear evidence that crystals are frost crystals, not fallen from the sky. Locally inclined surface may also be affecting the halo features. The image with parhelia extensions was taken with camera lens touching the ice, features close to the camera are thus formed in small surface area. Preferential atsimuthal orientation of crystals may be more likely in small than large surface area.

Opposite to the sun a white glow was seen at the subanthelic point (photo taken with camera on tripod). Airborne plates do not produce such effect, at least in simulations. Reflecting complex ice surface or/with frost crystals here must be chancing the rules so that the glow can be formed. Could this be called just a heiligenschein?

Halos were also observed at the nadir region. These are possibly patches of a circumzenith arc caused by light reflection from ice surface. The colors, on the other hand, seem similar to the halos from 60° refracting angle. According to the observer, sun is most likely towards the upper left corner in the photo.

A question remains whether these halos should be called with sub -prefix or not. This has some significance, because sub-120° parhelia and sub-circumzenith arc (or circumnadir arc) has not been observed yet. Subhalos from airborne plate crystals are characterized by a reflection from bottom basal face. Here the bottom basal face needed for the subhalos formation may be missing or is only partially developed as crystals are at attached on the ice.

Most likely the formation of the halos is to greater amount contributed by a reflection from ice surface before or after the rays enter or exit the crystal. If we take it that a subhalo must arise from ray path fully inside one crystal, then these are not subhalos.

Marko Riikonen, Jarmo Moilanen
Posted by The Halo Vault at 16:53