More results from the latest display in Rovaniemi 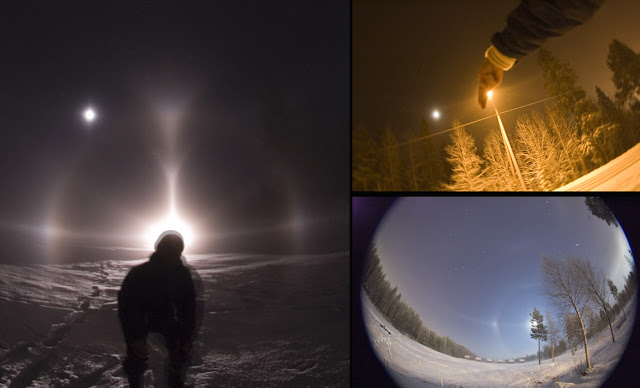 Here is some more material from the diamond dust in Rovaniemi three nights ago. After the heaviest Parry-crystal bombarding was over, Moilanen arc appeared, as shown in the photo on the left. Moon gives the beauty spot.

I have crystal photos from this stage, but as usual, they give no clue to Moilanen arc. In the earlier Parry-stage there was no indication of Moilanen arc whatsoever, but I did not manage to get the crystals. This bugs, because comparing the samples might have pushed us forward in solving the mystery.

The upper left image shows parhelia from streetlamp - the stripes that are parallel to the electric lines. Then there are also arcs extending slightly obliquely downwards. While visually parhelia curved towards me, these other arcs curved away and around me. As far as I understand from looking at divergent light simulations by Lars Gislen et. al, this effect is a 120° parhelion. In the photo only the brightest part of 120° parhelia is seen, visually the crystal glitter extented much further. Also a full parhelic circle was seen visually.

The lower left photo shows what was seen around the half moon at its best. For long time there was hardly no moon halo, although in the beam of the halogen torch a great display was present. Some indication of Lowitz arcs is present in the moon photo. The crystal sample may be representative of this stage, but I am not sure. Crystal photos of Lowitz displays are also very welcome

By Marko Riikonen
Posted by Alec Jones at 17:34