More photos from three weeks ago in Rovaniemi 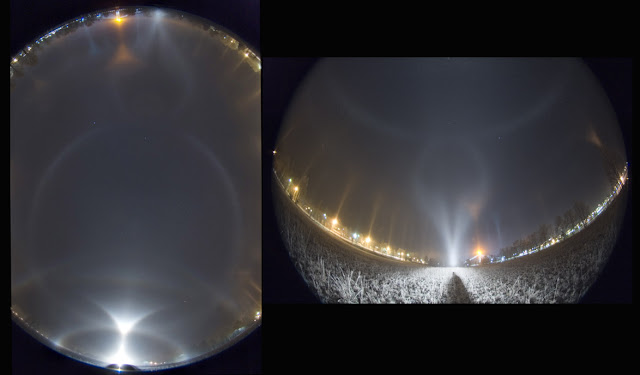 It seems putting the photos of the recent displays to my web page will delay. So, in a meanwhile here are two more photos of the display three weeks back.

When light source is at 0° elevation, some difficulties arises in identifying certain halos. Tricker arc and subanthelic arc merge together, as do helic and subhelic arcs. However, the subanthelic arc is formed by Parry-oriented crystals, while Tricker arc is from singly oriented columns. Because in this display the 46° supralateral arc is rather strong, and there are only weak indications of 46° Parry or Tape arcs, probably singly oriented columns were in command. The even brightness of the Tricker/subanthelic loop is also typical for Tricker arc. Subanthelic arc has strong brightenings on the sides - at least in the simulations - and that is actually what seems to be present in the the display of last weekend.

The reason why halos are seen so strongly in the halogen light is probably the relatively dark background sky as compared to sun or moon situation. Yet all the halogen lamp displays that I have photographed so far have been hampered by city lights. Once the crystal cloud drifts to the dark outskirts of the city, more intense appearances should be expected.

By Marko Riikonen
Posted by Alec Jones at 19:50