Another halogen lamp display from Rovaniemi 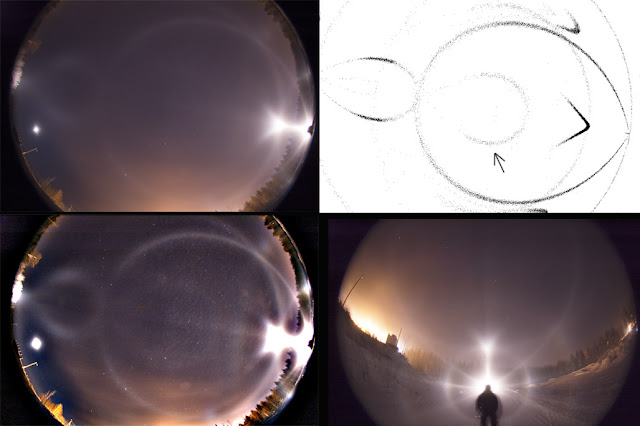 A bright halogen spotlight and diamond dust is a magic combination.


Spot yourself exactly in the middle of the beam and breathtaking halo views may rewards you. An outsider will see just somebody bathing in the light and may wonder what is going on. There might be a Moon in the sky at the same time - like in the case shown here - but it shows hardly no halos at all. The lamp creates its own universe of halos.

The Ounasvaara snow guns created this display last night in Rovaniemi in the beam of a Cyclops Thor Platinum X-15 halogen lamp. Because of the lack of 46° lateral arcs, this display must have been dominated by Parry crystals. Indeed, in the lower right image there are both upper and lower Tape arcs as an indication of Parry orientation.

An interesting feature is seen in the images on left (the lower image is an unsharp masked from the upper). There seems to be a loop inside the helic arc. Much like the loop formed by the subanthelic arc.

On the upper right is a simulation that shows a quite similar loop (arrow). The crystals in simulation are Parry oriented and they are semitriangular, a half way between a triangle and regular hexagon. The thing in the photo looks to me like a halo and it might be the one shown in the simulation. I have not raytraced it, so I don't know what it might be called. There are some differences in the loop sizes between the simulation and the photos, but then again the projections are not exatly the same.

A bit more could be said about the results of the last night, but this must do for now. The simulation was made with a program by Jukka Ruoskanen.

By Marko Riikonen
Posted by Alec Jones at 20:47