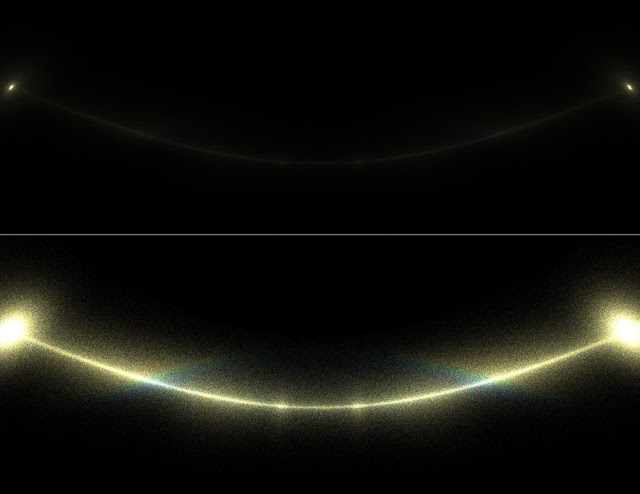 Blue spot is the colour feature of the parhelic circle occurring at the anthelic region of the sky. In addition to the blue, the theory predicts also green, but no red. Yet in several observations also red colour has been reported. However, because the red has never reproduced in photos, the observations have been doubted.


The image here shows two versions of a simulation of plate crystal parhelic circle in the anthelic region of the sky. The upper one has not been processed, the lower one has an overall levels adjustment to enhance colours. It looks like there is red present in addition to blue and green.

So it may be that observations of red may have not been wrong after all and that the theory (and naming) of the blue spot needs to be reconsidered. Lacking of the red in photos may be explained by film and sensor sensitivity issues. Even though the colors are seen with naked eye, they are still weak and some wavelenghts may be more prone than others to be not captured by the photographing equipment.

The simulation was made with a software developed by Jukka Ruoskanen. Sun elevation for the simulation is 25°, the plates have aspect ratio of 0.9 and tilt 3°.
Posted by Alec Jones at 20:30