When Stefan Danner was driving home in the evening of September 12th, he saw a pair of very beautiful sundogs. After having reached home, he noticed that there were two more halos – a very rare combination of a concave and a convex Parry arc. He could watch the two arcs getting brighter and brighter by the time. The impressive phenomenon lasted about 10 minutes before it ended showing a bright sundog.

Later, when he looked at the “raw pictures” closely, disenchantment followed: there was not a lot to see for the eyes of a layman. Only after having processed the pictures a little more or less, the effect of the halos in the pictures was like he felt it. (He saw them better than visible in the “raw pictures”, but not as intensive as they look after the processing.)

By Claudia Hinz
Posted by Alec Jones at 13:19 No comments: 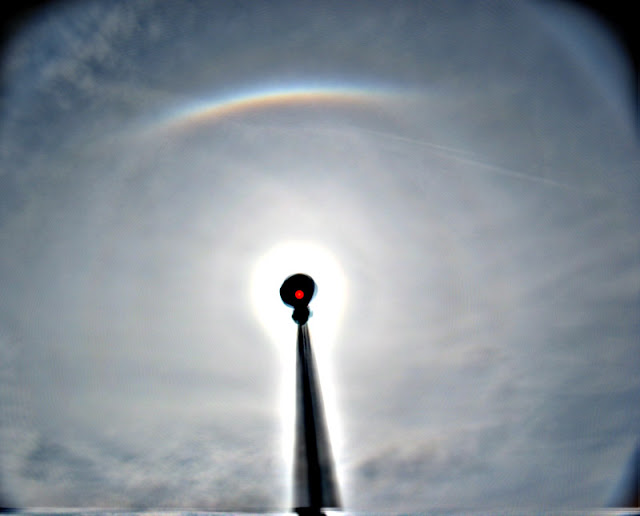 12th August 2007 - This day I can see interesting halo display. I thought that I could see upper tangent arc and inexpressive 22 degree halo. But the upper tangent arc was more and more brighter and lower tangent arc has not been seen. It crossed my mind that this phenomenon what i can see isn’t 22 degree tangent arc but 23 degree plate arc. I searched another pyramidal halos, but didn’t see it. Through that I took some photo. When I stacked and adjusted this photo was seen 9° halo, 18° halo, 23° upper plate arc and 22° or 23° halo. Lukas Kosarek

By Patrik Trncak
Posted by Alec Jones at 08:35 1 comment:

The Beginning of Halo Season in Hungary

The halo-season in Hungary has began in a very promising way. There were two particularly noteworthy displays this week. 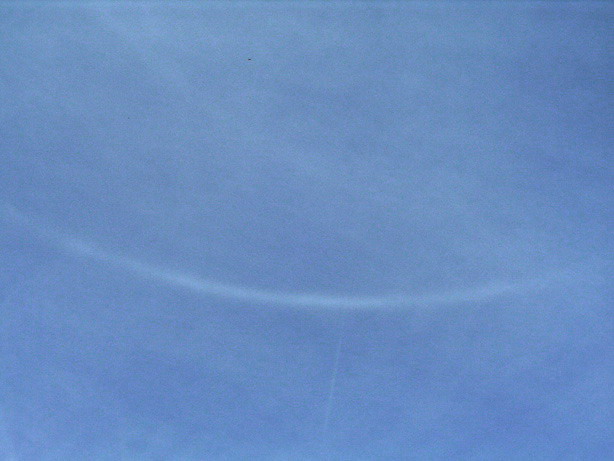 The first one was observed by László Henez "Felhőcske" on 16th September near Eger, Hungary. As a born halo-observer, even though he was quite unaware of what he was seeing, he took a picture of not only the sunward halos, but the anthelic side, as well, where about a quarter of the bright white parhelic circle was visible together with a Wegener arc curving downwards towards the anthelic point. The 22° halo and the upper tangent arc were seen in the sky covered with uniform Ci for about half an hour after 8:25 UTC, while the anthelic arcs for only a few minutes. László did not see any 120° parhelia or anthelion. More of László’s photos can be seen here. 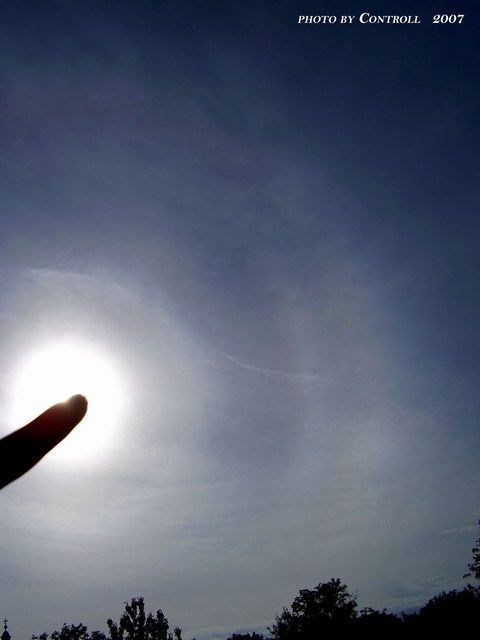 In the afternoon of 18th September, an odd radius display appeared with pyramidal 18° and 9° halos besides the 22° one. The photo was taken by "Controll" in Jobbágyi, northern Hungary, but the 18° halo was seen in Budapest by Alex Farkas, too. The display started with a 22° halo and lasted for roughly 40 minutes, until 14:15 UTC. "Controll" reported that she had seen a possible 46° halo as well, but it was at the edge of visiblity. It’s worth having a look at the faint pyramidal crystal parhelia in the picture provided. The full-size photo is also available, together with a panorama image of the display.

By Ágnes Kiricsi
Posted by Alec Jones at 06:34 3 comments:

Composite of the Kajaani display photos 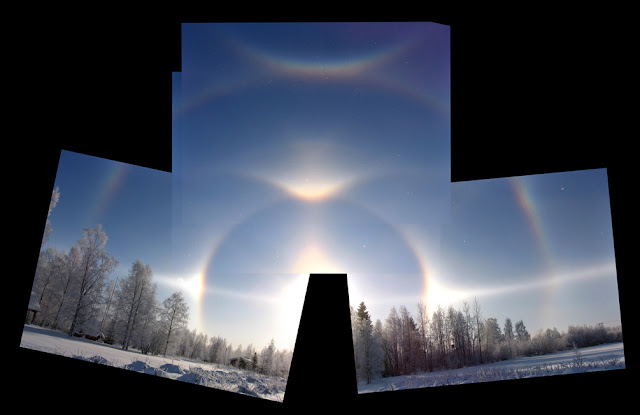 With the diamond dust season soon on our doorsteps, here is a tidbit from last winter. The display was seen in Kajaani on 26 February 2006. It was shortly presented in the blog, but now I made a composite which somewhat better shows the grandeur of the display. On a more technical side, the faintness of the 46 infralateral arc is noteworthy. In simulations this can be obtained with non-regular hexagons. The photos were taken by Kalevi Härkönen, who was at the time walking his dog.

By Marko Riikonen
Posted by Alec Jones at 14:40 No comments: 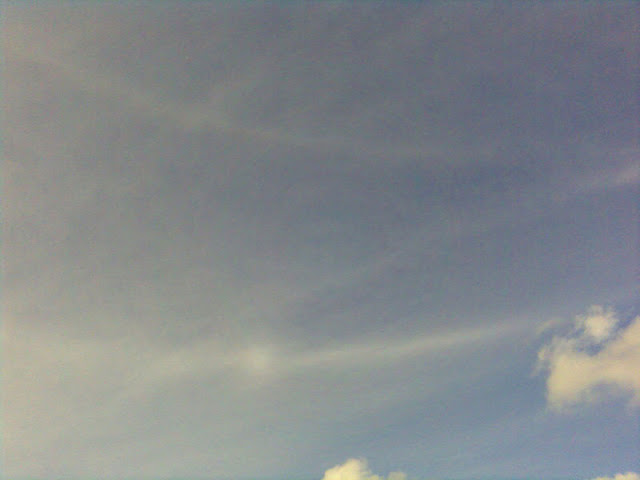 On August 28th anthelic arcs appeared in the northern part of Finland. My coffee break was suddenly halted as watching from the window I noticed several arcs. Once outside my eye was first caught by well developed parhelic circle. Then, looking up I noticed a colourful Wegener arc. Colours were red on the bottom and blue on the upper part. In the later stage of the display I noticed faint X at the anthelion indicative of the diffuse/Tricker arcs. I had no camera but my friend borrowed his camera equipped cellphone. Image quality is quite poor, but halos are still recognizable. Also Parry arc and 120 parhelia were present. Other halos were 22halo, parhelia, 22 upper tangent arc, parhelic circle, circumzenith arc, infralateral arc and supralateral arc. The display was noticed over large areas in Finland. More photos is here. Also see the photos by Arto Oksanen and Panu Lahtinen

By Marko Mikkila
Posted by Alec Jones at 18:02 1 comment:

Bright 120° parhelion over The Hague 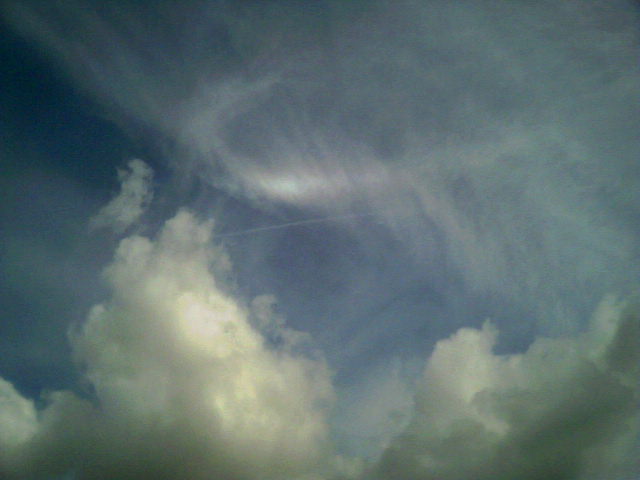 After a cloudy morning, the low clouds broke up and both the sun and higher cirrus clouds became visible.

The appearance of the cirrus was an indication for me, to keep a keen eye on the sky. That policy was worth-while, because a short time later, at about 11.35 C.E.S.T., a part of the Parhelic circle appeared, together with a remarkably bright 120 deg. Parhelion, in NNE-ly direction. Both the parhelic circle and the Parhelion presented a clear brownish-reddish fringe colouring. Immediately, I fetched my mobile-phone-with-camera, and made the picture, accompanying this message.

By Frank Nieuwenhuys
Posted by Alec Jones at 18:02 2 comments: