Halo made by fireball observed in Finland 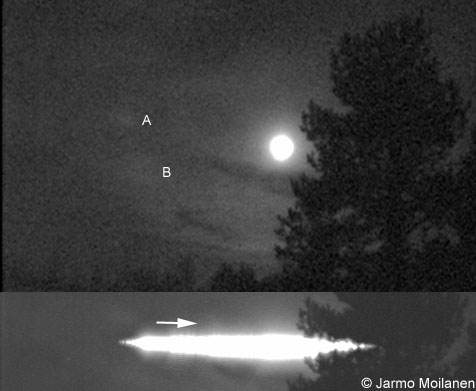 A fireball as bright as a full moon was observed in Finland 15 April 2007 at 00.13 local time. The fireball was also recorded by several fireball cameras in Finland.

In Vaala, a low-light video camera operating by Jarmo Moilanen got the whole event and also something extra: parhelion (A in image) and fragment of 22° halo (B) are following the fireball!

Image shown here is cropped from a single video frame. The fireball looks like a ball of light. In lower part of the image there is so called peak hold image from the fireball video showing the trace made by fireball during its 10 second existence.

Since fireballs are rare and sporadic events, halos made by fireballs are seldom reported. You can see the video here.
Posted by Alec Jones at 18:36