For all rare halos of the world is database now. The most contribution to database is from Finnish, Czech and German observing networks, and from a couple of active observers from USA. You can search the database in four ways: all observations, name of observer, country of observation and name of halo. To help overcome our dearth of halos, here is another archive picture. It was taken in the morning over Iberian Peninsula in April 1997 by Frank Wächter using a 35mm lens. It shows elliptical haloes around the subsun called Bottlinger's rings.
Posted by Alec Jones at 16:35 3 comments:

A halo caused by light reflected from water surface

This subsun-like pillar on front of dark cloud was photographed by Jenni Elina Holopainen on 18. May 2006 in Pyytivaara, Finland. The position of the pillar is apparently the same as that of the Sun's behind the cloud, which is better revealed by the cloud rays in another photo.


So how this is possible? The explanation must be a reflection of sun light from still water body and further reflection of this light from ice crystals that are precipitating from the Altocumulus clouds seen in the picture. Thus we are looking here - not at the subsun - but at "supersun".

The best sun pillars are usually seen in the icy virga of the Altocumulus clouds. This is because virga can consist of very big plate crystals that have plenty of horizontal surface to reflect sun light. Thus it would be expected that if this phenomenon were to occur, it would be Ac virga if anything. In high clouds it's impossible to see this, becase there is nothing behind the crystals to block the Sun. And when diamond dust occurs, waters are usually frozen. Thus ice crystals precipitating from middle level clouds is perhaps the only possible formation for the phenomenon Holopainen photographed. In yet another photo taken by Holopainen, a curved Ac virga can be seen in the middle of the picture above the lake. This is the lake that most likely was responsible for the reflection.


Actually this is not the first observation we have of this kind of phenomenon. In the end of 90's in Oulu a pillar of light (with no distinct subsun like appearance) was observed in a similar manner.
Posted by Alec Jones at 22:17 12 comments: 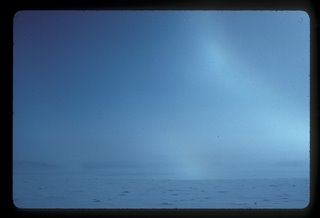 35° plate arc in lower center, 24° plate arc above it and slightly to the right, and faint infralateral arc (?) at far left. The angular distances from the sun still need to be measured, however. Dalton Highway, northern Alaska, April 17, 2006. The photo has not been manipulated. Copyright Walt Tape.
A wider angle photo of the same display is here. A photo of another display, about 20 minutes earlier and ten miles further south on the highway is here; (then at "on assignment: arctic Alaska").
Posted by Alec Jones at 01:15 7 comments:

While on break time at work I decided to check the sky and saw a 22d halo with a rather suspicious brightening that encircled the lower half of the halo. As the cloud moved on a rather bright arc appeared and I thought circumscribed halo no it was a lower 23 degree plate arc!! I could tell because there was no circumscribed halo which goes all the way around while lower 23 degree plate arc tails off away from the circular halo. Weak 18 degree halo was also observed. The photo has been given an unsharp mask to show the halo better. You can clearly see the arc tailing away from the halo while diminishing in intensity
Posted by Alec Jones at 01:16 15 comments: 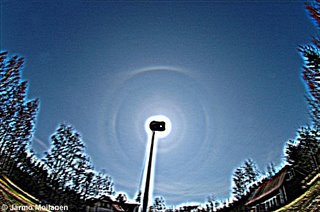 Jenni Holopainen in Joensuu probably got best odd radius halos during the day. Her photos can be seen here and here. Marko Mikkilä observed odd radius halos in Nivala, Teemu Öhman in Äänekoski and Eero Savolainen in Kuusankoski. Photos by Mikkilä and Savolainen can be found also here.
Posted by Alec Jones at 20:27 9 comments: 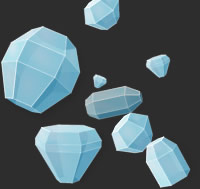 "Atmospheric Optics" has a newly updated section about halo forming ice crystals - check under "What's New". Plate, column and pyramidal crystals are illustrated with their orientations and resulting halos.
Posted by Alec Jones at 17:35 1 comment:

Atmospheric Phenomena blog can be found here.
Posted by Alec Jones at 10:44 1 comment:

This picture was taken on December 10, 2005 by Wolfgang Gurgiser at the summit of the Hohe Salve (1829 m, Kitzbühler Alps, Austria) at a temperature of about -7°C. Contrary to what is usual, this halo was not caused by cirrus clouds, but by diamond dust which had direct contact to the ground. This diamond dust consisted of needle-shaped ice crystals smaller than 1 cm.

Besides the 22°-halo, the picture also shows a V-shaped upper tangent arc and Parry arc, the arc of Moilanen which is also V-shaped and situated at 11° above the sun, and – emanating from the sun – the heliac arc.
Posted by Alec Jones at 20:09 No comments: