A long-lasting halo display was seen in Southern Finland on 25th April. The gems of the display were odd radius column arcs, of which 9, 20 and 24 degree arcs were seen. Additionally, 9 and 24 degree lower plate arcs as well as an 18 degree halo and possibly a 23 degree upper plate arc were visible for a short period of time during the day. The duration of the display was spectacular; for instance the Wegener anthelic arcs and 120° parhelia were continuously on the sky for almost three to four hours. At the latter stages of the display a beautiful 46° supralateral arc and magnificent circumzenith arc appeared. The display was photographed by many people - Marko Riikonen in Helsinki, Jari Luomanen in Tampere, Lauri Kangas in Espoo, Marja Wallin in Lahti, Timo Viinanen in Hameenlinna and Jukka Ruoskanen in Hyvinkaa.
Posted by Alec Jones at 20:08 7 comments:

Predominantly incomplete but brightly coloured elliptical halos over Deventer, the Netherlands on Sunday 23/4. The display occurred in two stages, the first performing one elliptic halo section (vertical radius app. 5degs) from 1030-1037 UT, the second from 1048 to 1100 UT, during some minutes including a fainter and smaller but complete inner elliptic halo (vertical radius app. 3degs). By the time shape was somewhat varying. Most striking was the coloration, with dominating red to orange but also yellow and blue outside. Sun elevations were 48.3degs at 1030, and 49.6degs at 1055UT.
Posted by Alec Jones at 14:44 10 comments:

Tranquility of a high-sun halo display

This fairly decent high-sun display was captured while I was on lunch break. Although there were no rare halos but there was 22d halo, circumscribed halo, smooth complete parhelic circle, and faint circumhorizon arc. The best part in my opinion was the parhelic circle. I have applied unsharp mask to bring the halos out better. Photos were taken on the 11th.
Posted by Alec Jones at 04:12 4 comments:

Because the black background and white text combination caused quite strong after image which disturbed watching the photos, we have changed the background to less contrasting grey.
Posted by Alec Jones at 19:37 No comments:

As month earlier, good moon halos visited the skies also this time. The display in the night of 12-13. April was seen over large areas in Finland. Halo developement was best in Hyvinkää, where Jukka Ruoskanen documented the display.

The photo here, taken by Ruoskanen, shows many features of interest. First there is Parry arc above the 22° tangent arc. Second, there are Lowitz arcs. They are best revealed by the gap (shown with an arrow) in the 22° halo at parhelia level. Also, curving of 22° halo towards parhelia is evident.

Third feature of interest is the 9° halo and the dark area inside it. Sometimes 9° halo is not seen in individual photos, but the conspicious darkening inside the halo location tells about it's existence. Stacking several photos then brings out the halo. The image here was stacked from 18 photos, but 9° halo was visible also in individual photos.

Finallly, there seems to be also suggestion of 9° upper plate arc, seen as an enhancement on top of 9° halo.
Posted by Alec Jones at 10:36 4 comments: 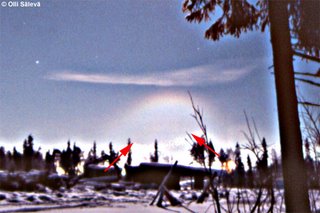 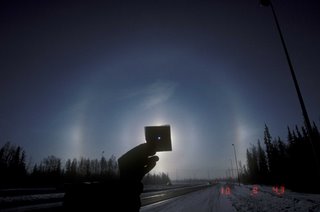 Alaskan town Fairbanks is renowned for it's odd radius halos during the winter. On 10. March 2006 there was odd radius halos but also diffuse anthelic arcs - a treat much less commonly seen in Fairbanks. According to Walt Tape the display lasted for several hours and was different in different parts of town. Outside the town no halos were visible, which indicates anthropogenic origin of the display.

In addition to diffuse arcs, another curiosity was also seen: odd radius column arcs. While they are regularly observed in high clouds, in diamond dust they have occurred only once before, at South Pole. The photo above, taken by Tape, shows poorly developed 9° odd radius column arcs as enhancements on the sides of the 9° halo.
Posted by Alec Jones at 20:38 1 comment: