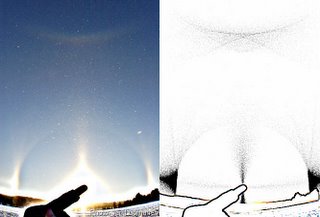 Here is an attempt simulate the Jari Luomanen display of 22. January 2006. Reflected Lowitz arcs arise in the simulation from thin plate crystals tilting 10° about the Lowitz axis. Same crystal population also makes the crossing arcs below circumzenith arc - the 46° contact arcs. These are not seen in the photo, but it was not possible to make simulation without them appearing (46° contact arcs are still theoretical, no reliable observations are known). Some other, less serious problems are also evident in the simulation. Reflected Lowitz arcs, however, are well in accordance with the photograph.

Two more crystal populations were used. Oriented plates made parhelia and circumzenith arc and poorly oriented plates the 22° halo. Sun elevation was 7°. More details on the simulation are here. Simulation is made with HaloSim by Les Cowley and Michael Schroeder. Simulation files are here.
Posted by The Halo Vault at 20:39