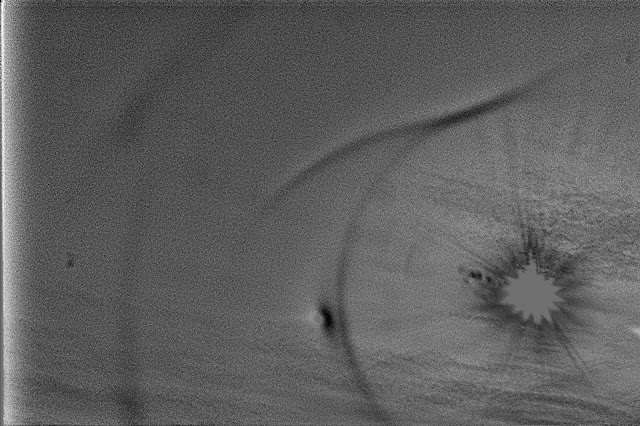 On the 27th of October a quick and interesting halo display took place in Ostrava, Czech Republic. I had little time to observe and the cirrus cloud shield was moving quickly. I was stacking frames with a camera only holding it in my hand. Meanwhile, I took some mobile phone pictures, but the quality is sub-par for any post-processing.
Before the clouds moved to a left-side position of the Sun, a rather weak uppercave Parry was observed. 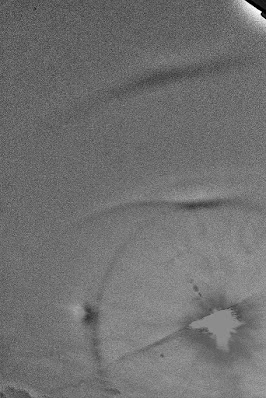 I was almost 100 % sure I saw Lowitz arcs as well, but there are no traces of them on single and stacked frames.

Below is a composite of stacked frames with colour, B-R processing, a simulation and its superimposition over the B-R processed stack. 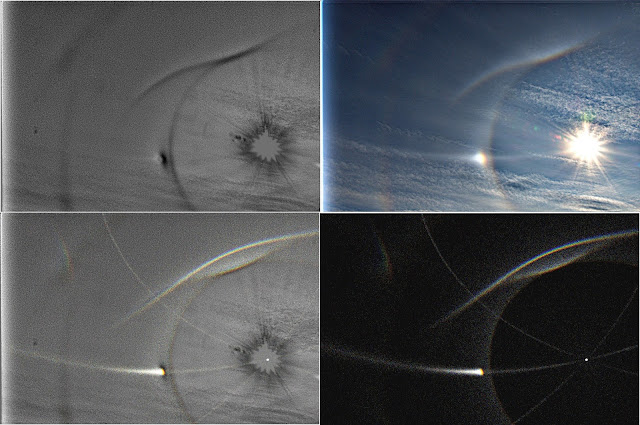 Let me know, what you think.

On August 26 2020, Zhang Yibing from Pu'er, Yunnan captured a sunset odd-radius display, in which a bright 28° arc dominates the show.

The arc’s brightness is almost on par with the 20° plate arc, while other plate arcs such as the 24° and 35° ones are exceptionally weak and barely show up in stacked photos. What’s more interesting about the 28° arc is its shape. What we are seeing in this display is a gently sun-vex arc which doesn’t quite follow the 28° sun-centric circle.

Such appearance contradicts current theories. In the 30-32 pyramid and cubic ice models ( http://www.thehalovault.org/2018/09/28-plate-arc-captured-in-haikou-china.html ), the predicted 28° arcs do not appear sun-vex like the 24° plate arcs do. Quite the opposite, when the crystals are wobbly, the arcs should look more sun-cave and follow the 28° sun-centric ring. 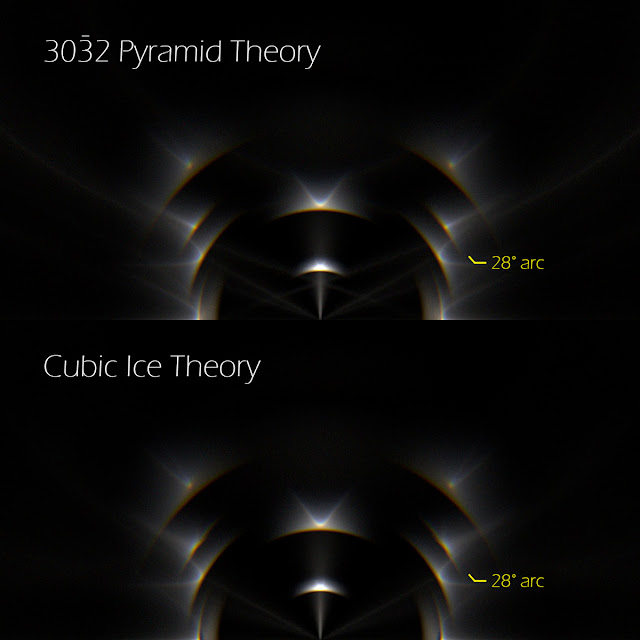 The puzzling shape can still be achieved by tweaking the available theories though. JI Yun and I did some experiments in ZHANG Jiajie’s simulation program and came up with a bizarre solution.

First is to tilt a triangular 30-32 upper pyramid by 109.5° until one of its pyramidal faces goes horizontal. Then, apply a loose ( 15° wobble or more) sun-ward azimuthal lock on both tilted 30-32 crystal and cubic ice. 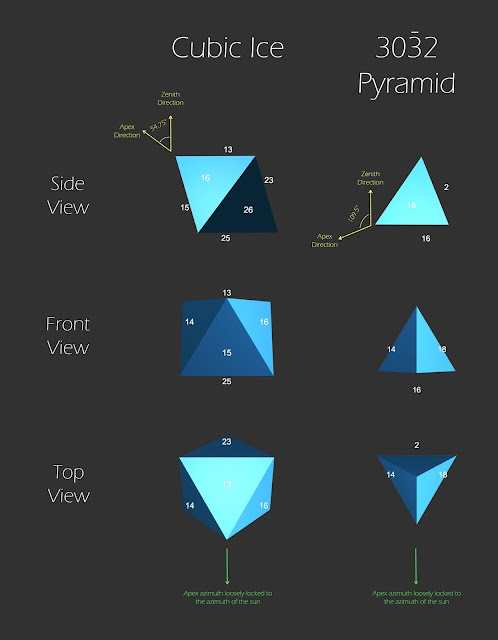 The revised models produce identical sun-vex 28° arcs which closely match the ones seen in the display. 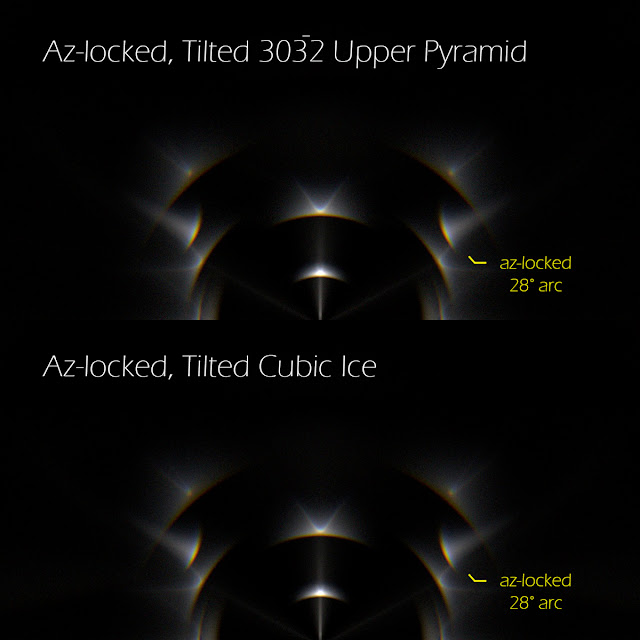 The idea of az-locking crystals in the air is certainly outlandish and should hardly be taken seriously unless concrete evidence is found in real world. That being said, there’s only so much we can do with available theories. New ideas/experiments are much needed.

This display marks the 11th record of 28° arcs in China since 2016, and more importantly, the 1st record revealing the arcs' real shape. Is it possible that what we're seeing in this display are actually new halos, different from the previous 10 Chinese records and the legendary Lascar arcs? Or is it that all these Chinese 28° arcs are a same new breed different from the Lascar ones? We'll need many more similar displays to draw a conclusion. Looking forward to the next summer.

Nicolas Lefaudeux proposed another possibility for the arc's peculiar appearance:

"On my side, the sunvex shape is still not so obvious to me. I see more a vertical elongation of the 28° arc + some patch of 28° halo.

Effects like diffraction by "vertically narrow" crystal faces would create such vertical elongation (like a plate crystal with exotic faces instead of regular prism faces). Unfortunately, such effects cannot be simulated with our current softwares. The appearance of the halos (smooth and rather undefined) make me think of diffraction-affected halos (small crystal faces), like most of the odd radius halos. We would need cases with sharper arcs in order to be more conclusive." 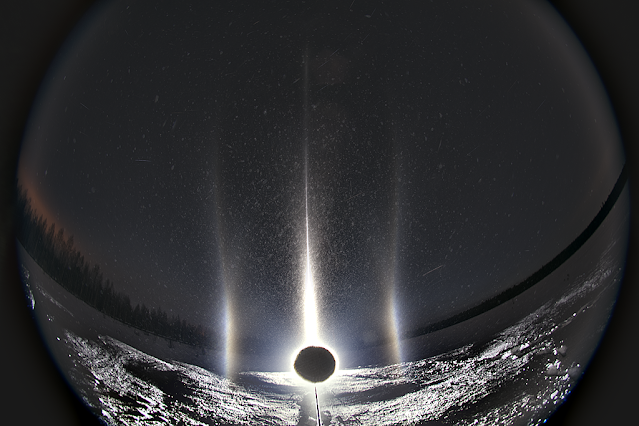 Diamond dust season is about to begin, the hissing of guns at the Ruka resort may be heard already at the end of September. To get in the spirit, let's reach into the drawer and grab this display which appeared on the night of 7/8 February 2017 in Rovaniemi. At first it was bog-standard plate with CNA, sub-120, and sub-Lilje / subparhelic circle patch opposite to the lamp, but then it changed, giving these long subparhelic arcs. The lamp sits at the usual ~5 degrees below the horizon. The location is Sieriaapa bog some 6 km east from the ski center. This is the direction where the diamond dust most often heads to, guided by the prevailing wind and topography. 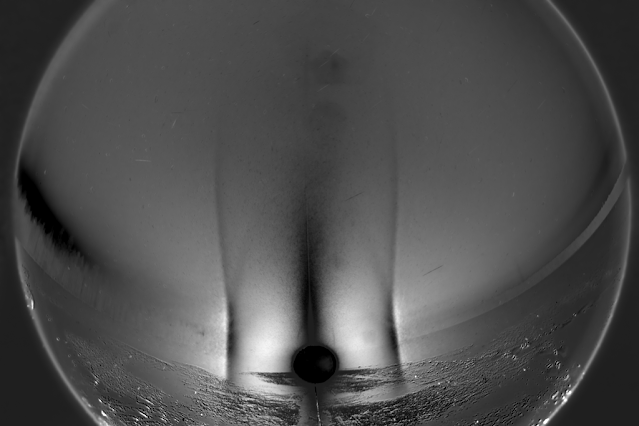 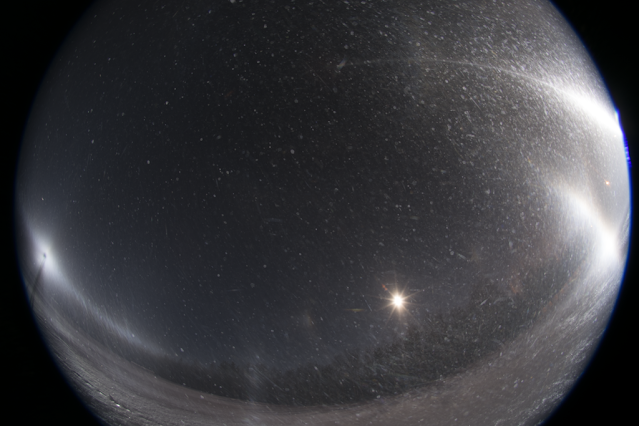 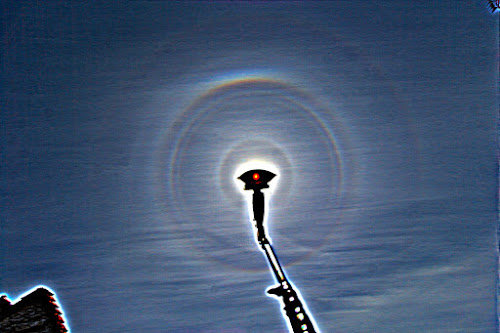 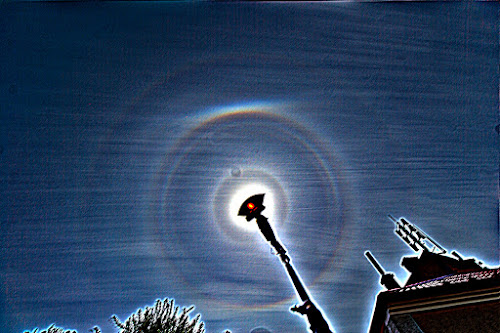 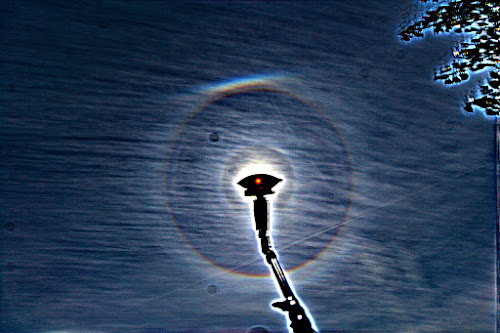 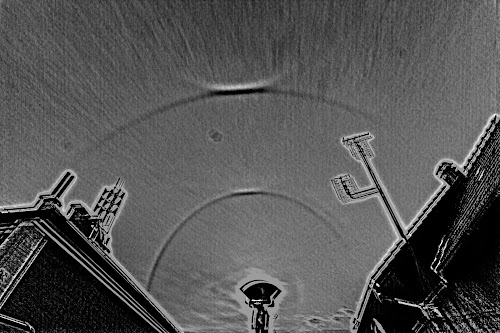 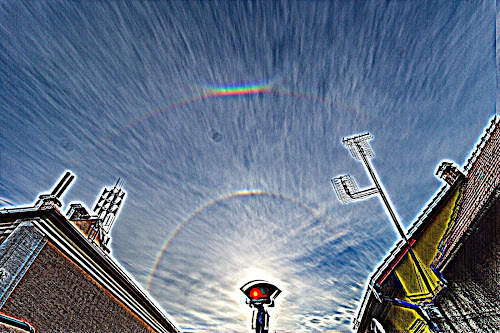 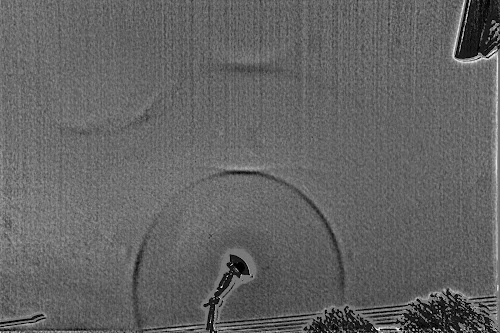 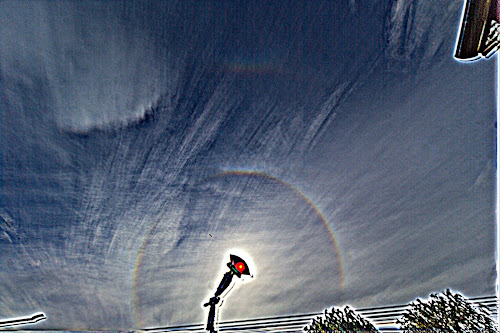 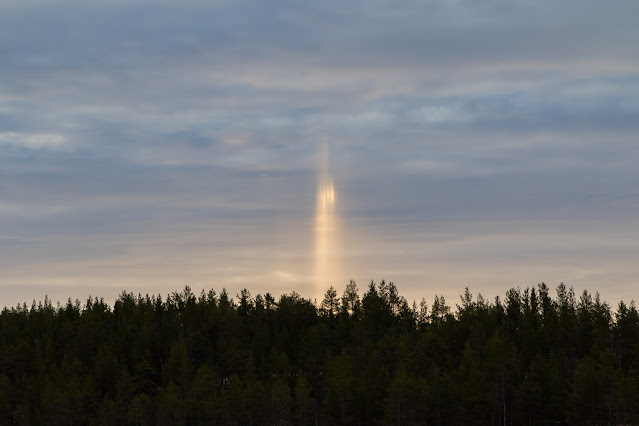 Heikki Kainulainen uploaded this reflection subsun a couple of days ago to the Finnish observation site Taivaanvahti. It was seen in the Muonio region of northern Finland on May 29. The photo was taken through window at 04:41 when the sun was 6.9 degrees above the horizon. In the direction of the sun there is, starting at 11 km distance from the observation site, a 3 km transect of water. This is lake Pallasjärvi, and could be the source of the reflection. It is the only large water body for 140 km in the sun direction. 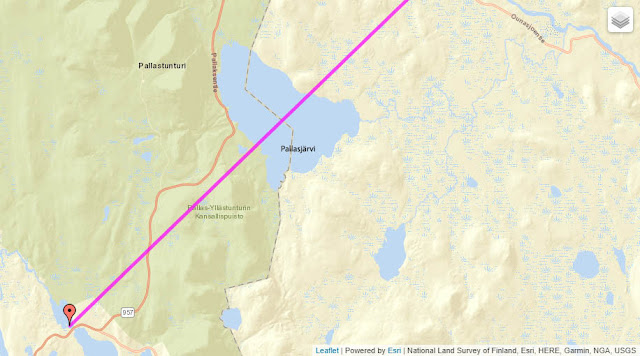 However, according to Kainulainen, Pallasjärvi was still frozen. So maybe the reflection was from the lake ice, or, as Kainulainen suggest as one possiblity, from the possible flood waters in the bog areas.
As reflection subsuns go, this is a beautiful specimen which shows also the mysterious effects of vertical striation and larger-than-sun width. Below is an usmed close up of the photo above to highlight these features. 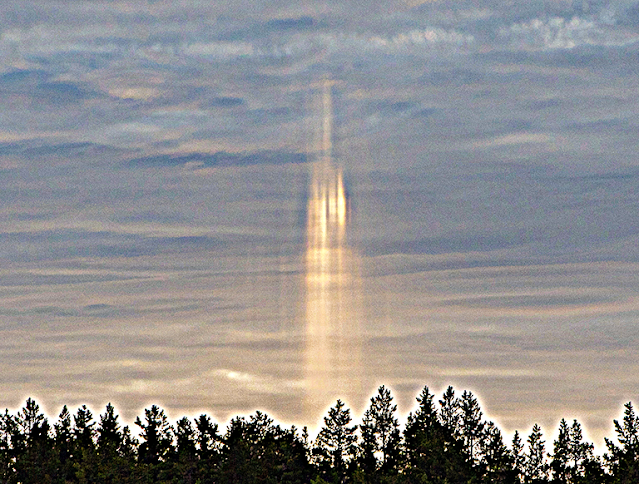 Yet one more image is shown, in which a separate photo of the sun has been superposed with the pillar. The width of the brightest part of the pillar is about equal with the sun disk, so this part most likely was located on the solar vertical. The sun reference photo was taken with the smallest aperture of the lens and shortest exposure time, but it may still be overexposed slightly. 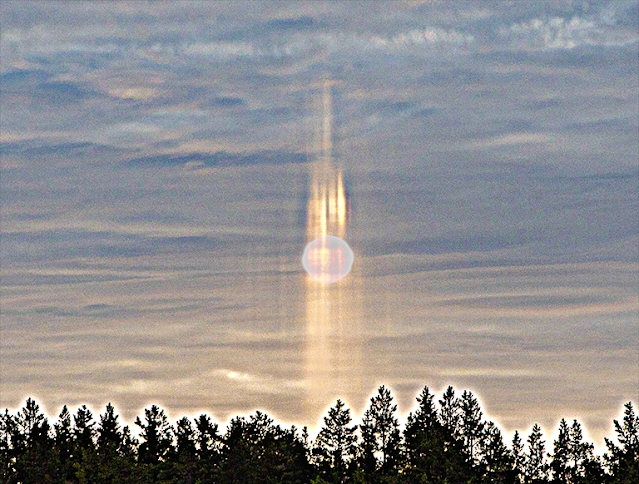 Reflection subsuns in Taivaanvahti
Posted by Marko Riikonen at 08:28 4 comments:

Moments before sunset on June 17 2020, a high quality odd-radius plate display with bright and vivid 28° arcs was documented by multiple observers in Ji'an, Jiangxi Province, China. 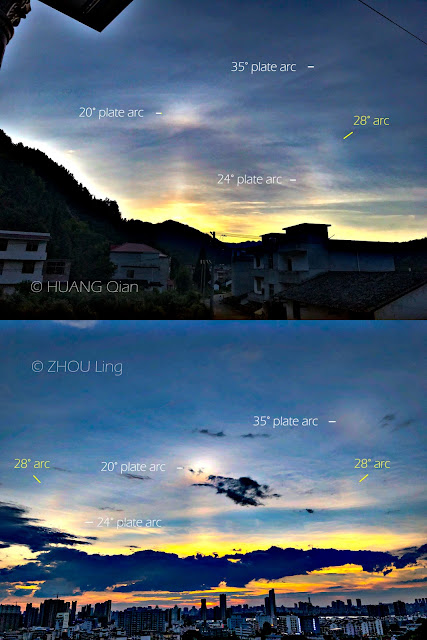 The intensity of the display rivals the 2016 Chengdu display as the 28° arcs stand out even in smartphone photos above. 20°, 24° and 35° plate arcs in the photos are also quite well defined.

Unfortunately, like previous displays, no other exotic arcs are found in the photos we received from the community.

Now that we have a great and early start of the season, let's hope for more great stuff to come.
Posted by Jia Hao at 15:37 5 comments:

Odd radius plate arcs have copies on the other side of the horizon, grouped around the subsun. People have been aware of the possibility of such arcs – I call them unofficially here as sub-plate arcs – at least from the 1990's, but no observations have surfaced.
Here I show three odd radius sub-plate arc displays that I photographed in Rovaniemi in the winter 2016/2017. The first display was seen on the night of 12/13 December 2016. Only one odd radius sub-plate arc was visible, the 18 sub-plate arc. Below are photos and animations of its appearance.

Flashing two stacked images from a continuous photo series, the other half which had subparhelia and the other which had 18 sub-plate arcs dominating. 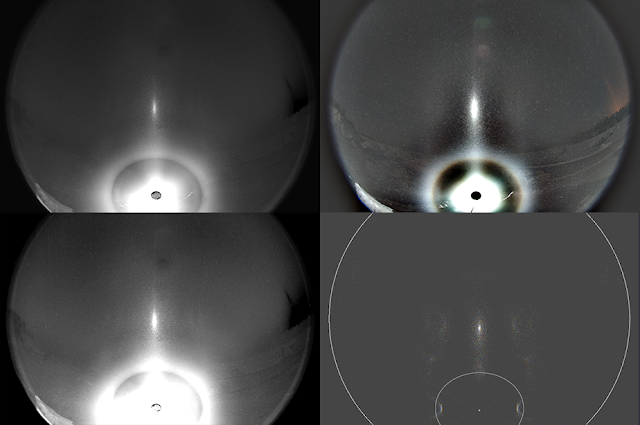 Versions of a stack with a slightly different set of photos than above and a simulation. Also other odd radius halos are visible: 18 plate arc and 18 halo, 35 plate arcs and faint 35 halo. 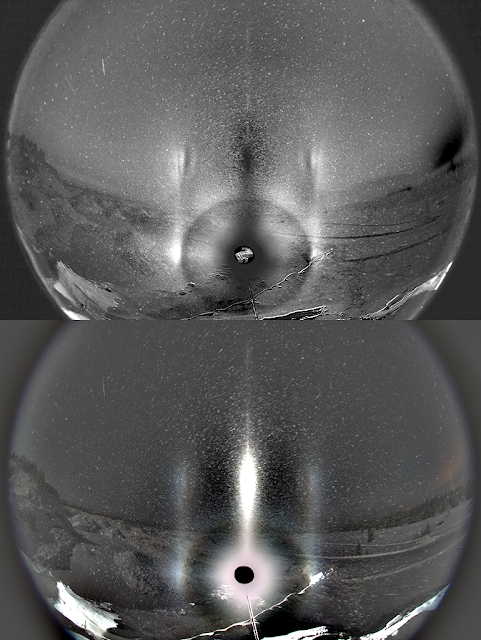 A stack of photos from another stage in the display. We see here three halos flanking the subsun: 18 sub-plate arc, subparhelia and a mysterious arc outside the subparhelia. The last one seems to be part of a longer arc that extend faintly to normal parhelion and reminds me of the arc in the 28/29 December 2016 display in Rovaniemi. 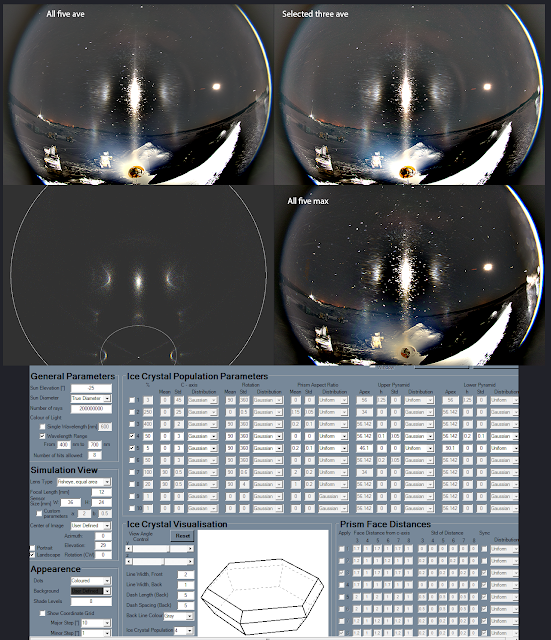 The best odd radius stage did not last long, here are shown three and five images stacks. The display is all but straighforward case. Like in the first display, there are three halos flanking the subsun: 18 sub-plate arc, subparhelia and, well, something. The vertical feature at the horizon should, according to the shown simulation, contain both 35 plate arcs and 35 sub-plate arcs, and while there may be both or either one, that is likely not the full explanation. See again the 28/29 November 2016 display, which is not an odd radius display, but which nevertheless contains a similar kind of thing. Yet another detail to pay attention is 20 sub-plate arc, which is in the simulation, but absent from the display. It was difficult to avoid it in simulation, it should have been in the display. Concerning the lack of normal parhelia and 18 plate arcs in the display, that may be explained by the lamp not being centered exactly on the camera, but shooting slightly over it. I am not sure, this is something to pay attention to in the future (hopefully the nightly diamond dust halo chase is not dead, as it seems now). 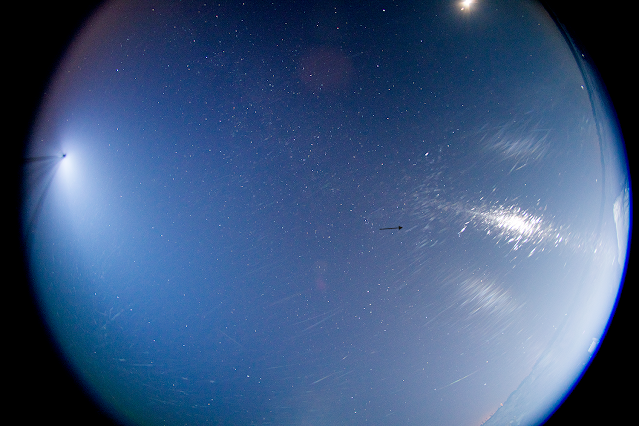 This single photo has the 23 sub-plate arc (arrow) somewhat better than in the stacks above. I turned camera here to try catching one of the distant, unobserved odd radius arcs that I had seen in simulations. Alas, no success. After this photo the odd radius stuff deteriorated quickly, so there was no getting a stack that might have actually gleamed out something novel. 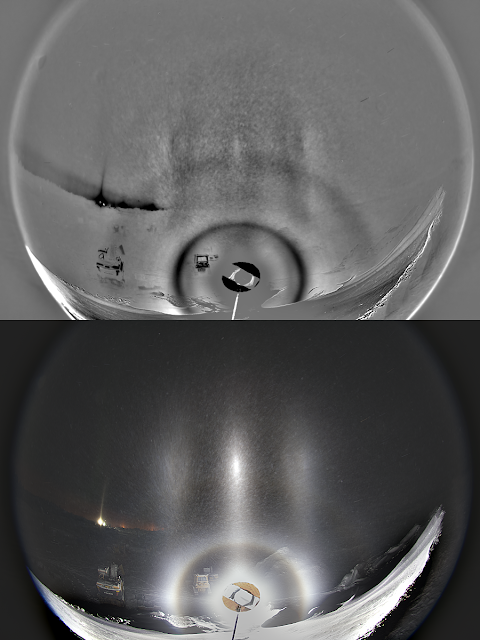 Even though the odd radius halos deteriorated, and the display started turning into a normal plate display, here 18 sub-plate arc is still visible inside subparhelia. 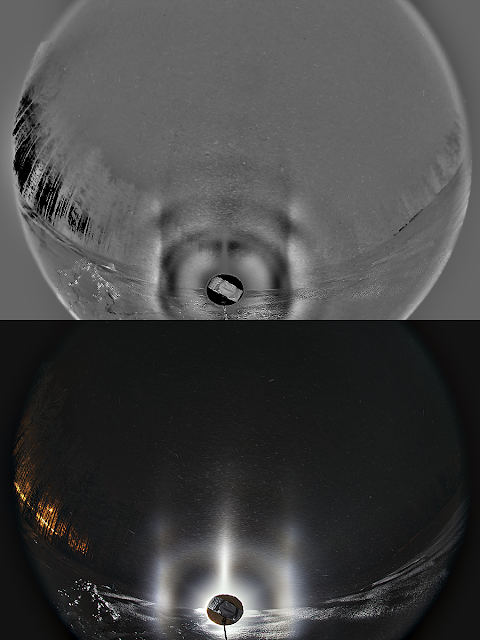 Another photo from another place that night with odd radius stuff. We see odd radius parhelia and circular halos at 18, 20, 24, 35 and a possible odd radius helic arc. No odd radius sub-plate arcs here.

And an animation showing the transformation from conventional display to an odd radius display.
_ _ _ _ _ _ _ _ _ _ _ _ _ _ _ _ _ _ _ _
The third and the last odd radius sub-plate arc occurrence was in the display on the night of 9/10 February 2017. Only a weak 18 sub-plate arcs were found from photos, as shown below. Again, the location is the Oikarainen gravel pits. It is a good place, with plenty of possibility to play with lamp elevation. It is quite far from the ski center, though, 12 km as the crow flies, so the diamond dust can reach there only on the coldest nights. 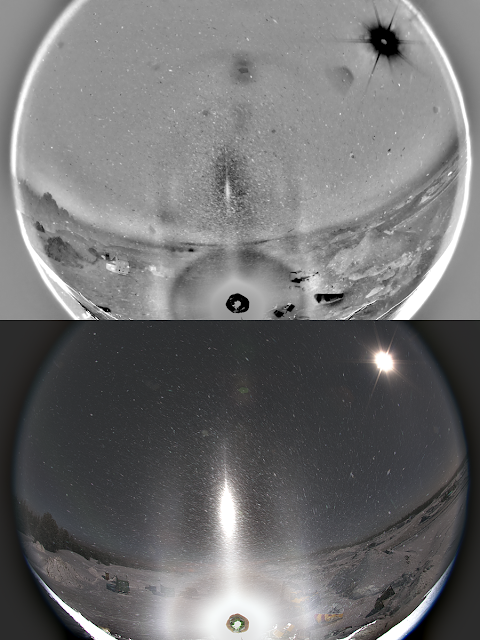 _ _ _ _ _ _ _ _ _ _ _ _ _ _ _ _ _ _ _ _
Taken that odd radius sub-plate arcs were found in three displays in one winter, they can't be regarded much of a rarity – just get to the right place, switch on the spotlight, and you got them bagged. With spotlight it is in general much more easier to catch subhorizon halos (well, any halos, really) than in solar displays. In case of the odd radius sub-plate arcs, the subhorizon spotlight method has also the advantage that, because of how pyramid crystals orient to keep the larger basal face as the upper face, these halos are easier to form than in sun light, the latter way of which requires the inner reflection to take place from the smaller, and thus less effective, down facing basal face.
For the last, I add here a collection of photos from first two of these displays, and the 28/29 December display (the bottom row), to more easily compare the features in them: 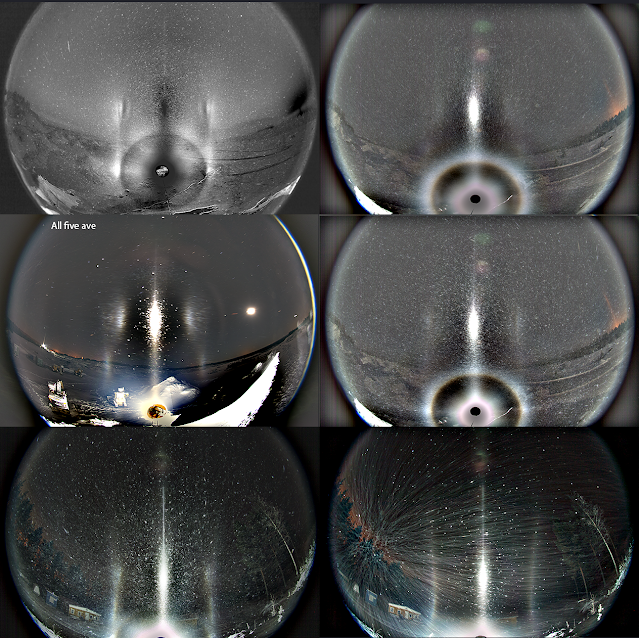 All simulations in this post are made with HaloPoint2.
Posted by Marko Riikonen at 11:07 3 comments: